The Obituary for Rev. Walter A. Buckius S.J. 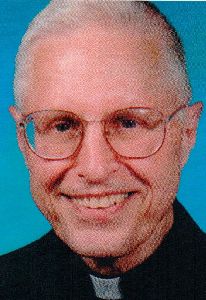 Rev. Walter A. Buckius, SJ, was born in Lancaster, PA on July 13, 1920. He graduated from Lancaster Catholic High School and after two years at Georgetown College in Washington, DC, entered the Society of Jesus at the Novitiate of St. Isaac Jogues in Wernersville, PA in 1940. He attended West Baden College in Indiana and received his B.A. and Licentiate in Philosophy. He then earned a Bachelor of Sacred Theology from Woodstock College in Woodstock, MD, and was ordained a priest on June 22, 1952. As a Jesuit scholastic, Fr. Buckius taught Latin, Greek and English at Georgetown Prep. Following ordination, he returned to the Novitiate of St. Isaac Jogues in Wernersville and served as socius to the novice master for Brothers and as a spiritual Father for Brothers. In 1966, he spent two years as superior of the Carroll House in Washington, DC, and then served five years as rector of Bishop's Latin School in Pittsburgh.

In 1973, Fr. Buckius began his nearly 40-year tenure at Wheeling Jesuit University in Wheeling, WV. He served his first decade as an academic counselor and rector, and in 1985 became the college chaplain for two years and then associate chaplain for eight. From 1995 to 2000, he served as assistant director of campus ministries, and continued his work in spiritual direction through 2011. He told his students, faculty and fellow Jesuits upon leaving, "Live your life with an open heart and you will see the image of Christ in all that you do." Fr. Buckius then moved to the Colombiere Jesuit Community in Baltimore, praying for the Church and the Society of Jesus.